NiCHE – the Marketing Club at IMNU

NiCHE, the marketing club of IMNU. represents not only a coming together of the most creative minds on campus but also a  legacy of having a different outlook and being pioneers in all aspects of marketing. We are a family with creativity as its most prized possession, Kotler as our guide and a belief that marketing is not just a subject but a way of life and that it runs in our bloodstreams.

Team NiCHE works relentlessly to bring numerous such event, seminars and workshops that tingles your grey cells. We believe ideas are the most important asset and hence bring specially curated opportunities for those ideas to emerge, develop and grow.

We aim to make marketing more accessible. To guide and assist students who see marketing as a career prospect. And to make sure IMNU further tightens its grip on being the favored choice for marketing.

Events of the club 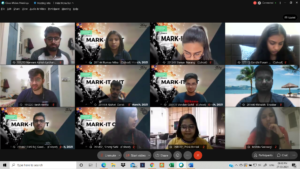 Mark-IT-Out was a fun & challenging event organized to test the participant’s Marketing and IT knowledge. The event also focused on efficient team building and team – coordination. The stiff competition amongst teams and thrilling environment helped the participants grasp the real atmosphere present outside the classrooms & create unique strategies in the most demanding ecosystem to bring out the real manager in them. The event was a success with the collaborative efforts of the Marketing and IT club of IMNU.

BRANDWIZER 2019, the first event of the current academic year was hosted by NiCHE, the marketing club of I.M.N.U. The event was a perfect opportunity to test the marketing awareness expected of an MBA graduate and also incorporated stimulations to make the experience fun and enlightening.

We the members of NiCHE believe in creating events that stay with the participants, intriguing them, enriching them and most importantly preparing them for what lies beyond the gates of our institution. Same could be seen in this event as well.

The first round tested the knowledge about Brand Evolution, Tagline of Brands, CEO / Founders, Logo and Brand ambassadors. The second round was a crossword puzzle to be solved, wherein one member enacted the brand names and other two members had to guess the answers. The third round was a relay, which required the participants to create correct sets of brand names, their logos and taglines. Each of these rounds were time bound to introduce an element of pressure and make the participants competent in working under pressure as well.

Caught by Kotler aimed to make students explore different dimensions of the market and work effectively in the challenging atmosphere.

The event was divided in two levels.

Round 1 checked the general awareness quotient of the teams about different companies, their marketing strategies, leaderships, branding campaigns etc.. Top 9 teams who answered the most questions in a span of 6 minutes combined with the accuracy level achieved were promoted to round 2.

Round 2 was the real challenge where each team was given a product and an era based on which complete marketing strategies were to be devised and articulated. Variety of products were provided as an option ranging from FMCG to B2B goods and unique services. The eras included Ice age and 10,000 BC. Each team laid out their unique marketing models in a span of 20 minutes, and presented to the audience and judges their pitch in a time limit of 5 minutes.

Right from basic STP analysis and value creation to complex structures and models of marketing, from the branding aspects to customer relationship management, each team presented their mettle.

The event was graced by Prof. Shahir Bhatt and Prof. Mayank Bhatia as judges who enlightened the audience in their ending speeches on ‘Value Creation – the core of the marketing’.

The stiff competition amongst teams and thrilling environment helped students grasp the real atmosphere present outside the classrooms and create unique marketing plans in the most demanding ecosystem to bring out the marketer present in each of them.

Niche – The Marketing Club of IMNU organized Market 2030, a national level advertisement making competition. The event was registered on dare2compete. And it was open to all the MBA institutes of the country. All the participants had to be in a team of 4, from the same institute. The registrations of the event were started from February 25-27 2019. Total of  57 teams from all over the country registered for the event. Out of the 57 teams, 14 were of Institute of Management, Nirma University. The teams were given two days to prepare the video and 3 days to promote those videos on social media. The event was judged by the faculty co-ordinators of Niche-The Marketing Club of IMNU, Dr Tejas Shah.

The event tested the participants’ out of the box thinking, creativity and application of marketing concepts. We saw a huge turnout for the event: 247 teams participated, each team consisting of 3 members.

It was conducted in 3 rounds. The details of each round are as follows:

First round was named “QUIZATHON”, where the participants were given 15 minutes to answer 30 questions online. Top 8 teams with the maximum score were selected for the second round.

The second round, “The Marketing Pentagon”, was conducted in the back lawn of the IMNU Campus. The teams were given numbers on their arrival and a rules sheet. 8 teams played at 5 booths simultaneously. Two teams competed with each other at a single time. The teams then switched over to the next booth. The odd- numbered teams moved counterclockwise and the even-numbered teams moved clockwise At each booth teams played one time and had to complete the assigned task within 5 minutes. The tasks were named, Hangman, Scrabble to Score, Sell the Unsellable, Relativity and Strikistan! . All the teams proceeded to the next round.

The third round was “CAMPAIGN TO CONQUER”. Each team was given a chance to choose a failed campaign from a list of failed campaigns and then they have to modify that campaign and come up with new campaign. They  had  to prepare a presentation of 9 minutes. The teams were judged by Professor Sandip Trada on the basis of predefined criteria.

Rannbhoomi is the flagship event organized by NiCHE- The Marketing Club of Institute of Management, Nirma University. It is an intra-institute event based on Marketing and provides the sections an opportunity to compete against one another. To showcase how and why your section is better than the rest is what this event is all about.