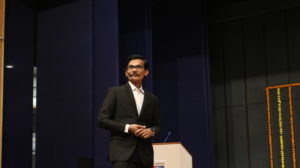 Aarohan
Adityavat- The BBA Co-Curricular Committee of Institute of Management, Nirma University organized its annual conclave Aarohan on 20th and 21st December 2019. The theme for the conclave was-‘Badlaav-Embracing the change’. Eight speakers from various domains were invited to address the students.

Mr. Abbey Rodriguez was the first speaker for the event. The session was chaired by Prof. Amola Bhatt. Mr. Abbey is the Sales- President of Cera Sanitaryware. His commitment towards his work helped him conquer every obstacle thrown at him despite being physically weak at that point of time due to cancer. In the session, he talked about how the influence of our attitude and perspective makes any experience positive or negative. He believes that humans are like supercomputers and that they have a lot of potential. One of the major key component which leads to badlaav is an analysis of our mistakes. He went on to add that the one thing which hinders badlaav is insecurity. If one is insecure about their position or work, it restricts their growth which leads to a failure of change. He urged the students to be optimistic and to face every difficulty bravely. He ended the session with the words- “Life gives us a lot of opportunities. We just have to keep our eyes open and focus on grabbing the best ones. This is what brings badlaav” 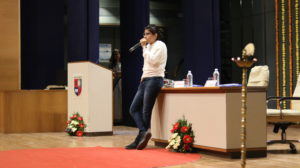 The second speaker for the conclave was Ms. Ankita Shrivastava. The session was chaired by Prof. Rajwinder Kaur. Ms. Ankita is a world record holder, live liver donor, a computer science engineer, an entrepreneur, a TED x speaker, national level swimmer and a published author. She has made history and broke the world record in long jump and ball throw. Her journey proves to be an inspiration for budding minds to look up to. Currently, she is managing her family business, helping in developing multiple intellectual properties meant for kids such as Purple Turtle, Colour Fairies, and many more, and her reach is international. She is also the Vice President of Aadarsh Pvt. Ltd. which is central India’s biggest printing and publishing unit for more than 25 years. She is also the co- founder of MSA Global Sourcing through which she has gained immense corporate experience.
Ms. Ankita began her speech by asking the audience if they believed in destiny. Then, she briefed the audience about her childhood and the hardships that she had to face at a very young age. When her mother was diagnosed with Hepatitis B, she took the responsibility of the whole house at a tender age of thirteen. She quoted, “It doesn’t take time to grow up, it takes incidences”. She also believes that no matter what happens, destiny is not to be blamed. Towards the end, she concluded by saying that one should believe in one’s idea and one should be able to convince people. She also said that we should value people more than anything in life. She also advised the students to utilise this prime time in their career carefully and to work hard without giving any excuses. 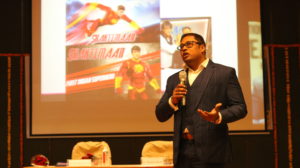 The speaker for the third session was Mr. Arijit Bhattarcharya, who is the founder of Virtual Infocomm, an international business developer, serial entrepreneur, Angel investor, public speaker, artist, author, community builder, virtual reality specialist, block chain specialist and game programmer. He has founded 9 start-ups in the VR, AR, gaming and e-commerce sectors. He is the creator of more than 43 super heroes and 21 comic characters. The session was chaired by Dr Nityesh Bhatt. His talk focused on Badlaav in the field of technology. He began by talking about his adventures as a young boy in the suburbs of Calcutta. He went on to share that his mother wanted him to become a lawyer while his dad wanted him to become a football player, but he was inspired to pursue a completely different path of life for himself. He wanted to do something remarkable yet unique and thus, chose the field of animation. He gave the students an entirely new abbreviation of CHANGE- Create, Humanitarian, Adjustable, New, Generation and Ecosystem. He went on to share stories of people who have accomplished something worthwhile in their lives. He also elucidated how he obtained a license from Mr. Mukesh Khanna- the creator of Shaktiman for a 3D character for his gaming application. He believes technological solutions make life easier. His ideology is that if one wants to build themselves, they need to be their true selves. He ended the session with the words, “If one wishes to achieve something in life, one must keep updating oneself.” 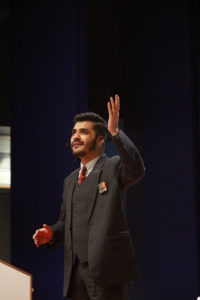 The fourth session was led by Major Mohommed Ali Shah. He is a Defence expert and analyst on many popular Indian News Channels. He is a well known theatre and film personality. He is also a visiting faculty at Subhash Ghai’s Whistling Woods International. The session chairperson was Prof. Diljeetkaur Makhija. Major Shah’s family has been serving the Indian Army since the last 200 years. He did not want to be the one to bring on the badlaav in this family tradition, but also wanted to act. He served the army for 5 years and stepped out to do what his heart wanted. He had an edge over the other actors by possessing the skills and discipline of an army man. As a child, he could not speak properly because of a lisp. He recalled participating in a competition and losing very badly, hence being the centre of humiliation. From that day onwards, for a year, he practiced speaking in front of a mirror and won the competition next year. He also emphasised on the fact that badlaav takes a lot of resistance. He faced rejection at many stages of his life, but finally joined the army. He was once one of the two selected candidates to lead the Republic Day parade. Even with a leg fracture, he led the parade because he had an undying passion. In the end, he left students with the message- “Never snooze. If you decide to do something, do it this very moment, do not wait for tomorrow. Bring the badlaav now.” 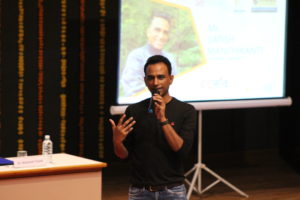 The fifth session of the conclave was led by Mr. Satish Manchikanti. He is the founder of U&I, India’s fastest growing youth movement, which is a volunteer driven committee which is aimed at solving social issues such as education, anti-trafficking, child and women welfare etc.
He began the session on a very light note by engaging the audience with his humorous remarks. He shared with the audience how he, just like any other Indian, aimed to live outside India and was able to fulfill that dream. Eventually when he lost his job, he took the decision of settling in India. He subsequently moved to Bangalore and started his own startup. The main aim of his startup was to impart good education in children majorly by providing them knowledge about English, and providing them good tuition. He believed that such an activity would lead to children having a dream or a goal in life and setting up their own role models. He always believed in the fact: “Be the change you wish to see in the world” by Mahatma Gandhi and hence named his startup U&I, which clearly emphasizes on group efforts. To conclude his session, he mentioned that he was actually glad that his NRI dream was broken as that one broken dream led to fulfillment of million other dreams of unprivileged children. He also advised the students to always have at least one big dream in their life for which they should always work with full dedication, as he mentioned that their dream is something that is always theirs and nobody else’s.